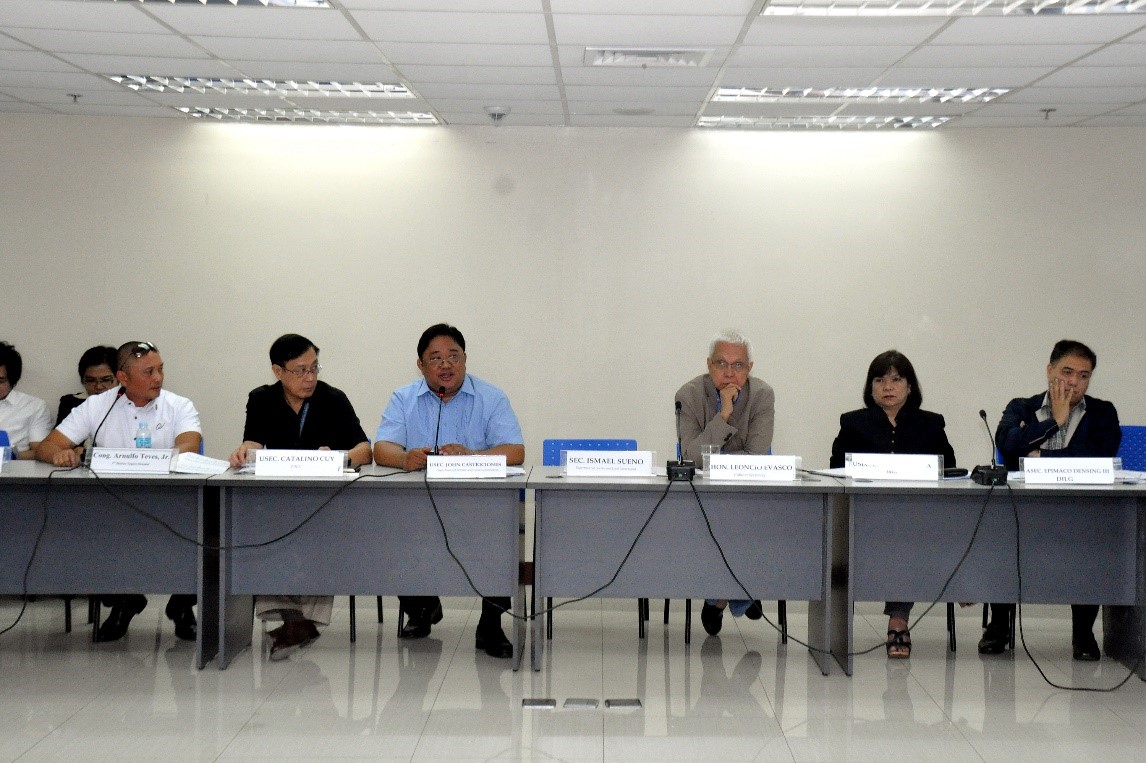 To ensure that drug surrenderees are provided with appropriate interventions, the Department of the Interior and Local Government (DILG) will mobilize its city and municipal field officers across the county in organizing barangay-based volunteers to take the lead role in the anti-illegal drug campaign.

DILG Secretary Ismael Sueno said that the profiling of the drug dependents will be the first step towards the whole-of-government approach in the rehabilitation and treatment of thousands of drug dependents across the country.
“The President hates drug addicts and drug lords but at the same time he loves them. The policy of the administration is not about killing them but to help them,” Sec. Sueno said.
During the inter-agency task force meeting held at the DILG-NAPOLCOM center held Tuesday morning, DILG Undersecretary John R. Castriciones said that the involvement of DILG city/municipal local government operations officers (C/MLGOOs) in the government’s anti-drug campaign is very crucial to the succeeding steps in the government’s drug rehabilitation program.
“The C/MLGOOs will do the profiling of the drug surrenderees using the approved template in order to gather the necessary data needed to provide the appropriate intervention for them to go back to the mainstream society,” Castriciones said.
The barangay-based network of community volunteers to be called the Community Rehabilitation Network (CRN) will be coming from faith-based organizations, private individuals, counselors, and practitioners from the private and public sectors.
Secretary to the Cabinet Leoncio Evasco said that the C/MLGOOs are the choice lead persons for the anti-drug campaign at the ground level.
“We would have wanted our mayors and barangay captains to lead in this campaign but there are some complexities at the LGU where some of them are involved in drugs so we would rather have the C/MLGOOs take the lead,” Sec. Evasco said.
There are 1,634 city/municipal local government operations officers assigned to each town and city of the country.

Strengthening of BADAC
Director Leocadio Trovella of the DILG- National Barangay Operations Office said that the C/MLGOOs will also lead in activating or reactivating the Barangay Anti-Drug Abuse Council (BADAC) in their respective jurisdictions.
“The C/MLGOOs will network with the BADAC and strengthen their involvement in this campaign,” said Dir. Trovella.
Acknowledging the financial constraints needed for a functional BADAC, DILG Assistant Secretary Epimaco Densing III said that the Department will release a memorandum circular regarding the budget.
“We will release a memo circular requiring all the barangays across the country to allot a budget for BADAC so that it will be really functional,” said Asec Densing.

Cluster approach
The DILG’s involvement in the profiling of drug surrenderees is the front-end of the inter-agency rehabilitation program for drug surrenderees who have decided to leave behind their old ways and be a useful citizen once again.
The said program is divided into three clusters, namely: Cluster 1: identification and classification; Cluster II: rehabilitation process; and Cluster III: post-rehabilitation/after care, reintegration, and transformation support for recovering drug dependents.
Cluster 1 is led by the Department of Health (DOH) with members from the Dangerous Drugs Board (DDB), Local Government Units, Department of Education (DepEd), DILG, and Philippine Drug Enforcement Agency. This cluster will handle the profiling, screening, drug testing, and provision of support services during the identification and classification process of drug surrenderees.
Cluster 2 is led by the Ugnayan ng Barangay at Simbahan (UBAS) with members from the Department of Social Welfare and Development (DSWD), Technical Education and Skills Authority (TESDA), Philippine National Police, Department of the Environment and Natural Resources, Non-Government Organizations, DILG, DBB, DOH, DepEd, and church clergy. This cluster will create committees on family care, community development, capacity development and patient/recovering drug dependent care during the rehabilitation process.
Cluster 3 is led by DSWD with members from TESDA, DILG, UBAS, Bureau of Jail Management and Penology, Department of Justice, DepEd, and church clergy. This cluster will provide programs and interventions like sustainable livelihood program, cash for work, children-in-conflict with the law, Unlad Kabataan, National Drug Education Program, Drug Dependents Training Program, Therapeutic Community Modality Program, and Halfway House and Livelihood Training Center during the post-rehabilitation process.
The reports presented by the clusters during the inter-agency meeting will be consolidated by the DILG for submission of Sec. Evasco to President Duterte. ###

Supplemental Bid Bulletin No. 1 for the Design and Build of Regional Office Annex Building and DILG Quirino Provincial Office Building

Notice of Failure of Bidding RO

Notice of Failure of Bidding Q

Notice of Failure of Bidding NV

Notice of Suspension of Procurement Activities

Invitation to Bid for the Construction of DILG Quirino Provincial Office

Invitation to Bid for Printing of DOH-IEC Materials