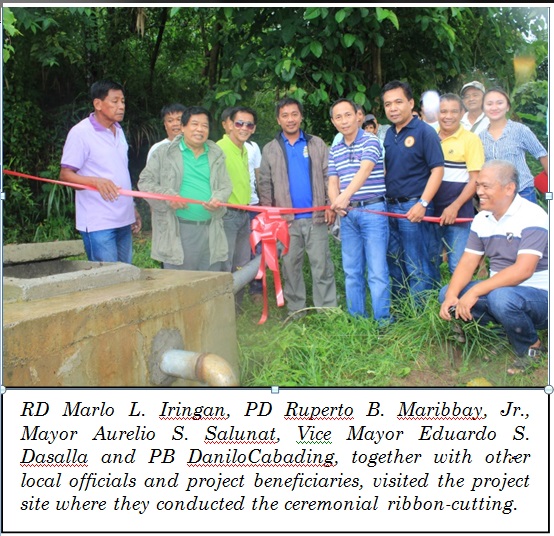 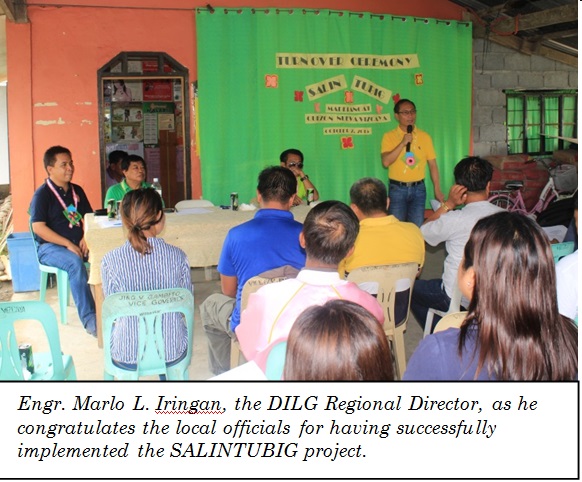 For years, the residents of barangay Maddiangat, Quezon, Nueva Vizcaya had to rely on deep well as their primary source of water supply in their community. But with the SALINTUBIG (Sagana at Ligtas na Tubig Para sa Lahat) program of the Department of the Interior and Local Government (DILG), about 400 households in barangay Maddiangat are now connected to a water system thus providing safe and potable water to residents previously left behind by development.

An Inauguration Program for the said project took place in the morning of October 2, 2015. DILG Regional Director Marlo L. Iringan,together with DILG Provincial Director Ruperto B. Maribbay Jr., graced the event. Also present were Mayor Aurelio S. Salunat, Vice Mayor Eduardo S. Dasalla and other members and heads of offices of the Local Government Unit of Quezon.
Prior to the start of the turn-over program, the participants, despite the light rains brought by typhoon Kabayan,trailed rocky and slippery terrains to visit the project site where they conducted the ceremonial ribbon-cutting.

Following the project site inspection is the Inauguration Program.The program commenced with an opening prayer led by Ptr. Delfin M. Asis followed by the singing of the national anthem and the Nueva Vizcaya hymn.

After the preliminaries, the message of the municipal mayor ensued. “The project is now yours,” declared Hon. Salunat as he addressed the barangay officials and the local residents present during the ceremonial turning over of the water project. He further said that barangay Maddiangat had been blessed to be among the recipients of the SALINTUBIG program. He also enjoined them to take care of the project because not all barangays are given the same ‘blessing’.
For RD Iringan, who gave an inspirational message afterwards, the project is commendable so are the people behind it. He said that true service also lies on how effectively the local government unit can implement projects for their constituents. Thus, he commended the close working relationship of the LGU with a special recognition to Mayor Salunat and Punong Barangay Danilo Cabading.

“The fruit of all your hard works has been reaped and the harvest is very much rewarding. Indeed, great things happen when we work as one and when we’re heading towards the same direction,” said RD Iringan in his message.
Hon. Cabading, on the other hand, said in his acceptance speech that they are very grateful to the President and to the DILG for giving barangay Maddiangat the opportunity to be one of the beneficiaries of the SALINTUBIG program. He noted that this10 million worth of project (9 million of which was downloaded thru SALINTUBIG funding and the remaining 1 million is the LGU counterpart) is so far the biggest project to have been granted to the barangay. Furthermore, he hopes that the government will not stop providing assistance to them. He also assured that the project is in good hands and that it will serve its purpose.

The ceremony ended with an expression of thanks by Hon. Dasalla to all the guests from the DILG as well as the neighboring residents who attended the ceremony.#